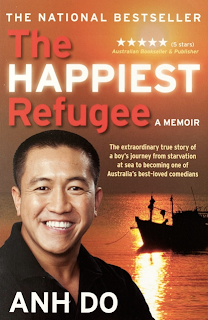 I was pleasantly surprised to see Anh Do’s memoir on my Mr14s Year 9 booklist for 2013.  As one can decipher from the title, it is a book of gratitude and seeking refuge to reside in another land. Many times Australia is referred to as the lucky country and I am extremely grateful that my family and I are indeed lucky enough to have been born into this safe, prosperous and relatively young country.  I am first generation Australian as both my parents immigrated from Malta and Germany over 50 years ago. I have heard fasinating stories of their own struggles and triumphs.

Perhaps a vast majority of the youth of today,  may not fully appreciate how difficult it was for past generations; the uncertainty, violence, terror, lack of food, clothing and medicine, the scarcity of resources and so on.  And therefore, I was pleased that the Year 9 boys were to gain a glimpse into the trials and tribulations of the Anh Do’s life in Vietnam, his passage to Australia in 1980 and journey here thus far.

Anh is a well known Australian comedian. He has appeared in TV comedy shows such as Thank God you’re here (similar to Whose line is it anyway) and has written and starred in feature films.  I knew the book, although serious in nature, would have many scattered light hearted moments.  This would appeal to Year 9 boys.

Apart from the obvious life lessons the book presents, Anh emphasis the extreme importance of valued role models in his life. His family being the most valued. An endearing moment in the book is when Anh surprised his high school drama teacher on a TV show aptly named “THANKS”   Anh recalls:

“There was a celebrity part of the show and the producers asked me if I wanted to thank anyone. I immediately thought of Mrs Borny. There I was, back at my old school, St Aloysius', hiding outside a classroom where Mrs Borny was inside talking to a class of boys. "You ready, Anh?" the producer asked me. "Give me a minute," I said as I tried to compose myself. Then in I walked with the camera crew, and I saw her again after 15 years. She looked amazing; same beautiful smile, same glint in her eye that emanated a wonderful generosity and promised that this little grey-haired lady was going to believe in you and give you every chance of learning and growing. She was surprised and shocked and couldn't believe that I'd even remembered her. I told her that it was her who convinced me I could write, that it was her who told me I was a good storyteller. I also told her that I was but one of probably thousands of kids whom she'd impacted with her kindness and that she was my Robin Williams character from Dead Poets Society. Tears welled up in her eyes.”

Wonderful gratitude right there. Anh remembers the belief Mrs Borny had in him when others didn’t see. He remembers HOW she made him feel. I love hearing stories of the impact teachers can have and also when they are made aware of this impact.

I guess the real hero of the book is Anh Do’s Mum.  She is a consistent force that held her family together.  Through her simle, upbeat and positive mantra of “No worries” she forged on to find innovative ways to provide for her family; financially and emotionally. Through all this she kept her smile AND sense of humour.

Anh’s father took the toil of his extended families struggles the worst. He is a brave man who reinforced a creative means to many ends, often married with a self sufficient streak.  One of the main lessons that is emphaised in this memoir is working hard yields results.  Being proactive here is a matter of life and death.  “You always have to make decisions in your life, Anh. And don’t kid yourself; when you don’t decide, that’s a decision.” (Page 171)
Posted by Jeannette James at 14:57

Thanks for stopping by! Would love to read your comments.